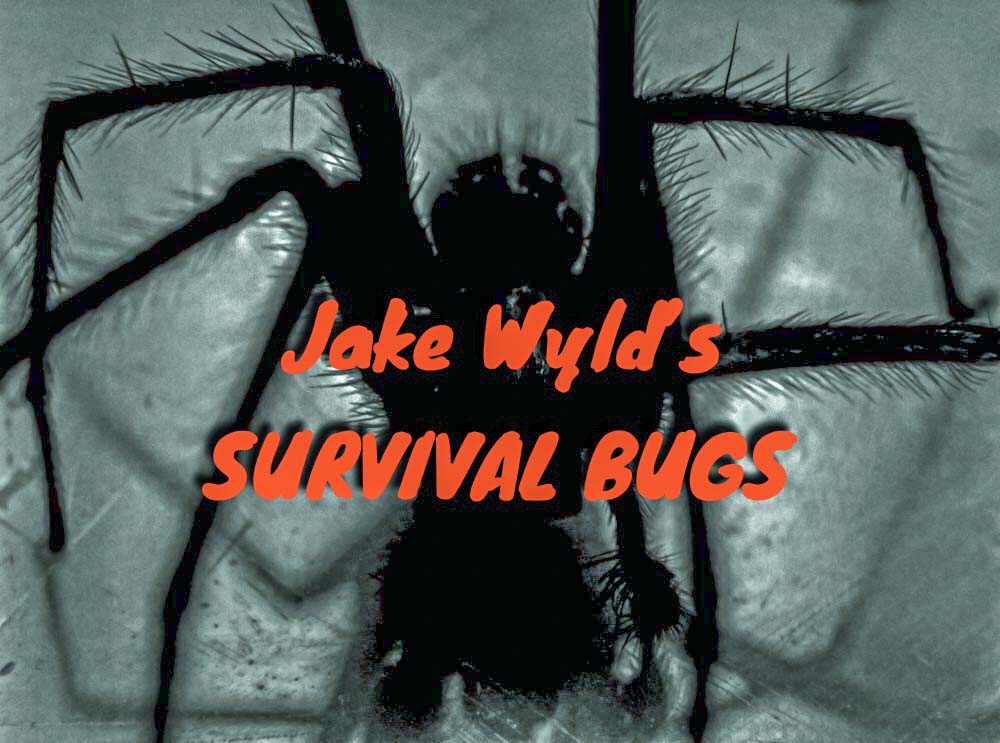 I’m Jake Wyld, and I eat “gross” things, so you don’t have to. Check out my work with Creek Stewart’s Survival Kitchen here:

When It comes to eating bugs, the western world views it as something taboo. It could be blamed on culture itself or the fact that economics in the West tend to be a bit healthier, affording people the ability to not “have to” eat bugs to survive. In fact, I’d dare say that most of us in the West would consider bugs as a last-ditch food option, purely for survival. That thought pattern isn’t the norm throughout most cultures in the world. Large amounts of insects, cooked in various ways, are not only consumed, but considered delicious treats—something to be savored and enjoyed. So, what’s the deal with eating bugs for survival and beyond? I want to find out! Join me on this series of posts where I delve into the creepy, crawly, and delicious scoop behind SURVIVAL BUGS.

I’ll be honest, I associate cockroaches with some pretty nasty things—decay, uncleanliness, and even disease. And to be honest, none of these associations are without merit. Cockroaches feast on rotting garbage and thrive in warm, germ-infested environments. Because of this, it’s logical that cockroaches can spread diseases to humans through defecation—things like salmonella, streptococcus, and staphylococcus—they can even carry the polio virus! In recent years, studies have shown that cockroaches even cause and agitate allergies.

Okay, so I’m not painting cockroaches in a positive light. But these bacteria-infested bugs, the ones that we know in the West (American Cockroach, Brown-banded Cockroach, Oriental Cockroach, and German Cockroach) are portrayed so negatively everywhere! Could there be any chance that cockroaches could serve, in a pinch, as a survival food?

Note: This is by no means anywhere close to an exhaustive list of peoples or places that consume cockroaches. It simply includes a couple of examples.

China has a booming market that has just come about in the last decade or so—cockroach farming! China is exploring options to help minimize the cost of medical care for its large and aging population. Cockroaches are farmed and fed healthy, clean fruits and vegetables and then consumed as a cheap and sustainable source of protein. It’s believed that cockroaches have medicinal value, too.

How They Eat Them: Skillet-fried, or double-fried

I had a friend in college whose parents were missionaries in Thailand, and he had spent some of his latter formative years there. I definitely heard some stories about the food and the “ick factor” it could have on someone with a Western palate. This includes the cockroach! He was adamant that people there LOVED them, and they touted that cockroaches were delicious. In fact, in Thailand, cockroaches serve as the base for many dishes considered “comfort” food in their culture.

How They Eat Them: Deep-fried; you can find lots of street vendors selling them on skewers. The Thai people love to cook their cockroaches with strong spices to give them a pungent flavor.

Anyone Who is Feeling Brave

I’d dare say many readers know of the Madagascar Hissing Cockroach. It’s large, loud, and downright creepy looking. I saw them for the first time when I was 12 years old watching Joe Rogan host Fear Factor. They made this guy get in a glass box and poured them on him. He lasted a few seconds before involuntary high-pitched squeals ensued and he bailed out of the challenge. In recent years, with the rising popularity of things like Fear Factor-style contests and YouTube food challenges, the Madagascar Hissing Cockroach has had its 15 minutes of fame.

Though they are only found on the island of Madagascar, off the cost of Africa, Madagascar Hissing Cockroaches are shipped and eaten all over the world. People even keep them as pets! That’s right, apparently these massive cockroaches are easy to care for, cheap to feed, and don’t need much space to have an enjoyable existence. Many places, including the United States, require permits to own a Madagascar Hissing Cockroach as a pet. There are strict limitations from fear of the species becoming an invasive one. They just need some warmth. Be forewarned, they are nocturnal insects, so unless you find the sound of their hissing the perfect white noise to fall asleep to, you may want to find a more agreeable pet.

Other Ways Cockroaches are Consumed Around the World: Roach Stir Fry, Roach Fondue, Roach Tacos and Burritos, and many more!

It should be noted that I’m not suggesting anyone, anytime, or anywhere eat a cockroach. Particularly in the United States. Roaches in highly developed places tend to be what they eat, which is usually garbage and rot from urban areas. The cultures that consume cockroaches seem to either be attempting to farm them cleanly and healthily or eating them from the wild jungles and forests, where the diet of the cockroach consists of a lot of wild fruits and/or vegetation.

Cockroach farming has become popular in recent years for the same reason cricket farming has—done correctly, it’s a healthy and sustainable high-protein food that is cheap and easy to maintain. That’s huge for developing countries and poorer regions of the world.

I have eaten some weirdly disgusting things. I can’t personally speak to the taste of cockroaches, as I have never tried one. However, after researching and scouring videos and the internet for articles, I can confidently say that the consensus is that they are somewhat bland in taste, taking on the flavor of any strong spice or marinade they are cooked with. However, it’s suggested that alone, cockroaches have a slight shrimp-like flavor. I will say, having eaten a tarantula and a centipede cooked over a fire, I can imagine how that might be the flavor profile. Weirdly enough, the insects I have devoured do have somewhat of a fishy/shrimp-like taste to them.

THE VERDICT: NOT A SURVIVAL FOOD (FOR ME, AT LEAST)

When it comes to our bellies here in the West, it looks like we got the 1% on the cockroaches—purely pests. I’d say it’s the best and healthiest option to stay away from eating cockroaches, even in a survival scenario. I don’t deny that if hunger strikes, you might do whatever you need to fill up on calories and survive. But when it comes to eating the cockroaches that we know here in North America and other highly developed places where the cockroaches aren’t feeding on fruits and wild veggies all day, I think the risk of potential disease or sickness are enough to make me pass. Besides, if you’re in a survival situation and you eat something that will make you sick, you’ll end up losing more bodily fluids and doing more harm than good for yourself and your situation.

Disclaimer: Neither the author nor the publisher of this post advise that anyone, anytime, anywhere eat a cockroach.

Jake Wyld is a former chef, photographer, content creator, producer, avid writer, and a professional editor in the outdoor space. He currently operates as Senior Editor at DROPSToNE Press and works for Wilderness Survival Instructor and TV Host, Creek Stewart, as Director of Operations for APOCABOX (https://www.myapocabox.com/), SURVIVAL SKILL of the MONTH CLUB (https://www.survivalskillofthemonth.com/), WILD EDIBLE PLANT of the MONTH CLUB (https://www.wildedibleplantofthemonth.com/), SURVIVAL on the 7th (https://www.survivalonthe7th.com/), and OUTDOORCORE ( https://www.outdoorcore.com/). Jake is currently working on his first fiction novel, due out in 2020. You can follow him on his Instagram and Twitter, both handles are @thejakewyld

How well do you know your Venison (Deer) Meat Cuts?