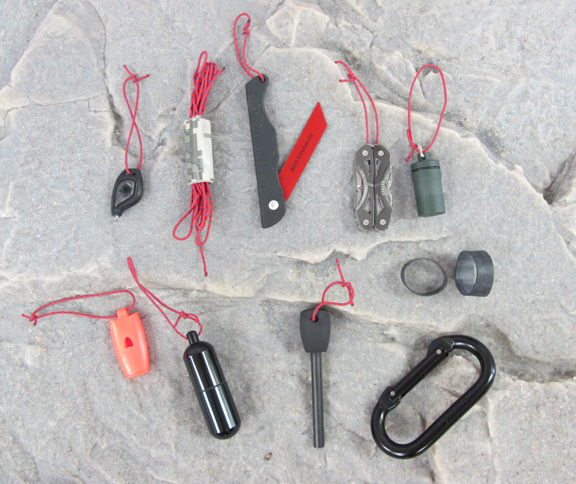 Every Day Carry (EDC) is about as personal as it gets when it comes to discussing survival gear and/or mentality.  I personally really enjoy discussing EDC with other survival junkies.

Every Day Carry is the phrase that encompasses the survival related gear that you carry on your person.  It could be in your pockets, in a back-pack, hanging from a carabiner, in a sheath, on your belt or around your neck.  There are all kinds of ways to carry your EDC gear.  The underlying concept behind EDC is that you are carrying the necessary tools on you to help get you through a survival situation in the event that something unexpected happens.  Below is a picture of my EDC carabiner with a variety of survival tools.

What items are considered EDC?

EDC can be anything that you think is important.  It’s different for everyone.  It can be as simple as a pocket knife to as complex as a mini Bug Out Bag on your back and everything in between.  If it’s an item that you think could help increase your chances of survival should something crazy suddenly and unexpectedly happen, then it’s EDC.  It doesn’t have to be so extreme either.  Many guys and gals carry EDC and don’t even know it.  For example, my Grandpa always carried a beat up Old Timer pocket knife and used it constantly for fishing, farm work and preparing meals.  This knife was his EDC.

My EDC is constantly evolving.  As I meet with other survivalists and see their EDC I change mine and vice versa.  I have 2 EDC sets.  The first is my ALL THE TIME EDC which consists of my cell phone, my keys w/ P38 can opener, my wallet w/ fresel lens, a tube of Carmex lip balm (fire extender), and a Spyderco Native.  These are the items I carry all the time – to Church, to the grocery, to work, around the house, etc…

I also have a 2nd EDC set that I carry with me when I do anything outside of my daily routine such as take a road trip, go hunting, go canoeing, travel, etc…  This kit is much more extensive and is carried on a carabiner attached to my belt.  Should anything  completely unexpected happen, these tools can give me a huge head start in getting through.

Below is a detailed photo of the items included in this kit.

In this set I have:

Like I said, I am constantly changing and revising my EDC sets but right now this is what they look like at the time of this post.

Survival is a way of life.  It is an awareness of what could happen and being prepared to deal with the unexpected.  EDC fits right in with this mentality.  I hope you’ve enjoyed my thoughts on EDC.  What are yours?