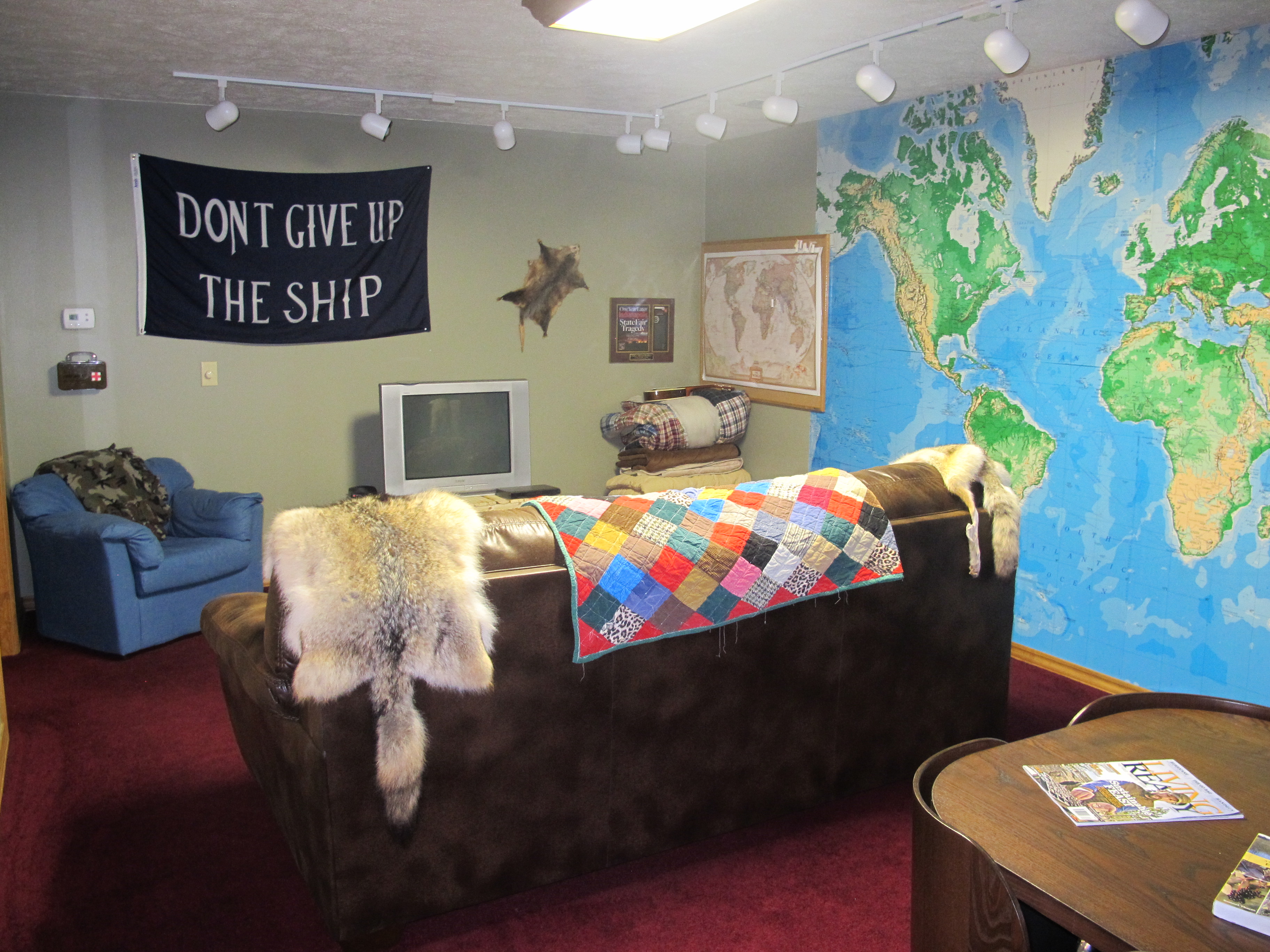 Mental Survival Skills: Don’t Give Up The Ship

For Christmas last year I received a gift from a friend of mine. It was a big, navy blue flag with bold white letters that reads, “Don’t give up the ship.”   Confused at first, I did some research to see where that quote came from.  It didn’t take long to find out that this command was given by U.S. Navy Captain James Lawrence, who ordered his crewmen to not give up during a battle against the British warship HMS Shannon even though he himself was mortally wounded.

Do you have a “fight her till she sinks” attitude?

So much of success in survival (and life) is mental. More people have made it through unspeakable survival scenarios (and achieved lofty goals) because of the sheer refusal to give up the ship. Mental perseverance is at the core of survival.

I hung the flag up in our media room at Willow Haven which you can see below.  Now, it’s a visual reminder to me every time I go into that room.  Visual reinforcement of important skills is never a bad idea.

There is only one way to master survival skills – practice. Whether physical or mental, all survival skills worth having are the result of trial, error, failure and repetition. For example, to master fire by friction (rubbing two sticks together), one must develop special techniques, strengthen certain muscle groups and understand specific steps in order to be successful. These skills don’t come from books or videos or verbal instruction. They only come from hands-on practice.

Mental stamina is no different. Each and every day we have opportunities to practice mental stamina. I call this muscle group the giveupmaximus.

Strengthen your giveupmaximus one small decision at a time.

Each time you flex your giveupmaxiumus by refusing to give up, it gets stronger. Alternatively, each time you give up (even on seemingly insignificant tasks), this muscle group gets weaker. Each decision to give up (not flex) makes future opportunities to give up easier and easier. Flex your giveupmaximus as often as possible. Don’t give up on even the little tasks you attempt throughout each day. Refusing to give up on the little things will pay huge rewards when you need stamina for the tasks that really matter.

When you pull a shopping cart from the corral on your way into a grocery store and it’s stuck to another one, don’t give up and choose a different one. Follow through with your decision to take that cart and “unstuck” it. Not only have you flexed your giveupmaximus, but you’re also not leaving the problem for someone else to solve. I’ve gone back to my truck to get tools to unstick a grocery cart before. Make the little things personal. Little flexes build subconscious stamina. We are faced with hundreds of opportunities to strengthen our giveupmaximus each and every day. Take them!

Failure is not failure; giving up is failure.

Develop a new perspective about failure. Failures are rarely final attempts. You haven’t failed until no more attempts are possible.

Giving up is final. Giving up relinquishes all future attempts to try. Failure is a step in the right direction, a learning opportunity.

Giving up develops counterproductive, anti-survival qualities including low self-esteem, unfulfillment and resentment toward others. The more one gives up, the easier giving up becomes. It’s a vicious cycle that destroys willpower and fuels long term frustration. This is the give up snowball effect. Overtime, giving up on small tasks reduces the endurance necessary to push through larger and more complex goals and dreams. We are a product of the little decisions we make each day.

Large tasks and goals can feel overwhelming – even if your giveupmaximus is in good shape. In survival scenarios, goals and tasks are complicated with life-threatening elements and are easily clouded by fear, confusion and panic. Even small tasks can feel daunting.

For large tasks that may feel too big to conquer, I suggest breaking them down into manageable chunks. I call this goalienteering, named after the sport of orienteering. Orienteering is a sport where you use a map and compass to navigate from point to point toward a final destination. Reaching each individual point along the way makes the final destination achievable. The little destinations between are critical! The same is true with life and survival goals. Practice goalienteering now, so that you know how to do it when your life may depend on it.

Fight till you sink.

Become a person who will fight till you sink. The world needs us, now more than ever. Practice each day flexing your giveupmaxiumus on the seemingly insignificant tasks and chores to build endurance for the day when everything might hang in the balance.  Don’t Give Up the Ship!  Fight her till she sinks!