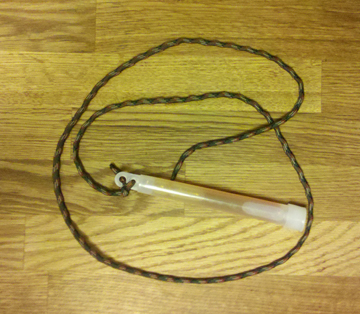 As many of you would agree, signaling for rescue in any survival situation is extremely important. The more signaling ‘know-how’ tactics you have in your mental preparedness Bag-O-Tricks the better your chances are of rescue – plain and simple.

However, with that said, the way you use a survival rescue tool is just as important (if not more important) than the actual tool itself. Whether it’s a smoke signal, a flare gun or a blaze orange flag, if you don’t know how to effectively use the signaling device your chances of rescue go way down.

In this post I’d like to introduce you to a very simple nighttime signaling technique called the BUZZ-SAW. The technique is most effectively used with a breakable glow stick, though I’ve seen it done with fire as well.

The Breakable Glow Stick is a great survival tool. Not only can it be used as an emergency light source, but it makes for a great nighttime survival distress signal. Even though it’s a 1-time use product, I highly recommend packing a couple of these in your BushCraft Pack and your Bug Out Bag. They are only about $1 and are very light weight. You can also purchase a battery powered LED version that has a glow stick on one end and an actual flashlight on the other. This can be used in the same way as a regular 1-time use glow-stick.

When executing any kind of distress signal, it needs to appear as unnatural as possible in contrast to your surroundings. This typically includes bright colors, movement and/or odd shapes. Sets of 3 is a universal signal for distress as well. When using a Glow Stick as a nighttime survival signal, there is definitely a WRONG way and a RIGHT way to get the job done. In a survival situation even the simplest of details are critical. From a long distance, it is surprisingly easy to mistake the light from a glow stick as a random glimmer on water or a reflection from the moon or even a lightning bug. Just cracking the stick and moving it around is not enough…not even close. The best way to ensure visibility is for the signal to be as unnatural to your surroundings as possible.

To make the BUZZ SAW effect, swing your glow stick in circles as fast as you can with the circles facing the direction of where you want to signal. This creates a very unnatural full circle of light called a BUZZ SAW. It is absolutely unmistakable in a nighttime setting. It can be confused for nothing in nature and very little even in urban environments. It is an excellent signaling method.

Below is a shot of the BUZZ SAW method being used with a burning torch attached to a piece of cordage.

Tuck this tip away – you never know when you’ll need it.

Remember, it’s not IF but WHEN,
Creek

How To Tie A Shemagh