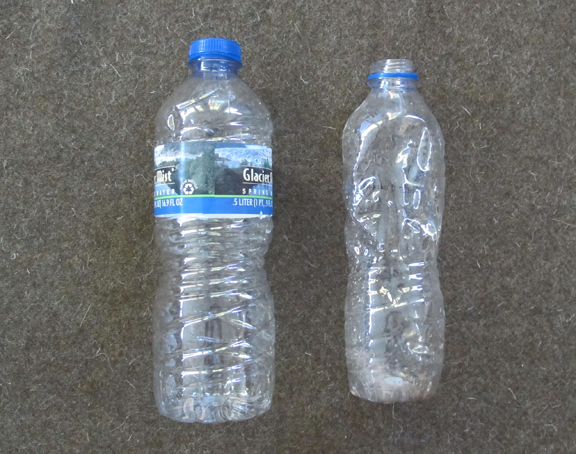 I travel far and wide to experience nature.  Even when I think I am completely remote in a secluded area it seems I still cannot completely escape human litter & trash.  On almost every water-way I’ve ever traveled from rivers to lakes to oceans I’ve seen some kind of  human litter floating or washed on shore.

To a survivalist, however, someone’s trash can be a life-saving treasure.  It really is amazing how you can use complete trash that we throw away everyday to help meet basic survival needs.  It’s the simplest items that are the most useful in a situation when you have nothing.  In this instance – a container for boiling water.  [pullquote]Boiling is 100% effective method of water purification.  It kills bacteria, cysts and virus.[/pullquote]  The ability to boil water can make the difference between life and death in any survival situation.  With all of the plastic bottles scattered throughout our lands and waterways it is not unlikely for you to find one – even in a remote environment.  If you can make fire, you can boil water using a plastic bottle.  Here is how it’s done.

Remove Cap & Suspend Over or Place Near the Fire

In this example, I propped a long stick up on a Y stick in the ground so I could easily control the height of the bottle over the fire.  I suspended the plastic bottle of water using a piece of rope.  I suspect I could have set the bottle close to the fire as well.  I kept the bottle at about 5-6″ over the coals and the flame licked the bottom on many occasions.

It took about 15 minutes to bring the water to a rolling boil and I left it boiling for about 20 minutes after that.  The bottle did distort in shape with the heat from the fire but the plastic did not fail.  I think you could use the bottle several times to boil if necessary.  I used a very thin walled plastic bottle so a thicker bottle would probably last longer.  Do not leave the cap on unless you want a hot steam explosion.  Below is a before and after picture of the bottle.

As you can see the bottle actually SHRUNK during the heating/boiling process.  I thought it would expand but it did not.  The lesson here is to fill your bottle only 3/4 full to prevent spillage into your fire.  If the wind is blowing hard you will also want to build a wind screen because the wind will effect your water temp in the hanging bottle and slow down the boiling process.