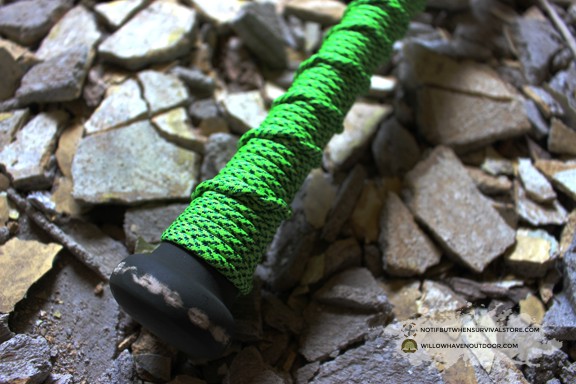 NOTE:  These weapons are flat out dangerous and designed for entertainment purposes only.  Recreate at your own risk.

I’ve just finished a several week writing project that required way too much cerebral effort.  Quite frankly, my brain hurts.  After being trapped in front of a computer that long I normally feel like just going outside and blowing something up or burning through 1000 rounds of ammo as fast as humanly possible into my burning barrel.  Not this time though.  This time I fought the urge to be destructive and instead decided to do something constructive with my time, skills and energy.  Something that would make the world a better place.  Something, I decided, that would make my Mom and Dad proud.

If you’re the type of person that takes survival articles a little too seriously then you may want to skip this one because I’ll be the first to admit that it is absolutely ridiculous.  Sadly, though, I think I had more fun writing (and making) this post than about any other I’ve ever done – yes even more than the Ultimate Survival Shot Gun and The Swiss Army Survival Tampon.  Not sure what that says about me but it’s the truth.

So you wanna turn your Louisville Slugger into a weapon against the walking dead?  Below are 6 ideas to get you started.

I really wanted to make a version of the rusty spiked bat that everyone thinks of when they allow themselves to wonder about such things.  However, I wanted it to be different than anything I’d ever seen before.  What better way to make it different than to mount a machete to the end?  So that’s what I did.  A 12″ machete blade is bolted right into the end of the bat.  But that’s not it.  Just in case the machete blade doesn’t do the trick, eight massive steel spikes shroud the base for some extra collateral damage.  I topped it off with a cobra weave wrist lanyard because I don’t want an aggressive zombie running off with my bat just in case it gets stuck.  Batter up!

I call this one ‘Tina for short.  Concertina wire, or popularly called razor wire, is some nasty stuff.  It’s like barbed wire except instead of barbs it’s lined with razors.  Typically reserved for warfare and to line the perimeter of maximum security prisons, I figured a nice nest of this stuff fence stapled around a baseball bat would be a pretty formidable zombie face smasher.  Geez, I cut my hands up wearing leather welding gloves just wrapping this ‘death wire’ around the bat.  I understand first hand why this stuff has such a bad reputation.  I remember watching prison break movies thinking, “I bet I could crawl over that razor wire.”  Well let me tell you, there ain’t no freakin’ way you’re crawling over this stuff.  Concertina wire was birthed in warfare and it gives off that eerie feeling when you look at and handle it.  If plants grow in hell I imagine they look like this stuff.  “Hey, zombie, I want you to meet someone.  Her name’s ‘Tina.”

Oooouch!  With it’s roots in the Middle Ages, the Flail is absolutely barbaric.  I cut the last 6″ off a normal bat, connected it to a steel chain and then studded it with archery field target points.  This thing hurts just holding it in your hand.  These target points actually screw into studs that I mounted into the wood.  You could theoretically replace all of these field points with razor broad-heads if you wanted a spiked razor bat but the idea is to be able to replace damaged spikes ‘on-the-fly’ with a pocket full of extra points.  The spiral wrap paracord handle gives plenty of grip when the G’s from spinning try to rip it out of your hand.  The amount of momentum generated with just a couple rotations of the 5 pound spiked head is terrifying.  I think this weapon could actually elicit FEAR in ZOMBIES.  That’s how scary this thing is once it gets-a-spinnin’.  Home Run every time – guaranteed!

Look what you can do with a few busted bottles, some Liquid Nails adhesive, a L-ville Slugger and some demented creativity!  I should call this bat THE SHREDDER because that is what it would do to a zombie’s head, neck, face and chest with just one whack.  It’s a beautiful bat actually.  When the sun flickers through the colored glass it almost looks artistic and maybe a little magical.  I think the real magic of this bat, though, is it’s ability to make a zombie’s head completely disappear!

This 4 sectioned bat gets ’em going and coming.  The middle two sections are studded with razor sharp steel spikes.  These are for gripping and ripping.  I’ve mounted a custom piece of weaponry to the end of the ‘scorpion’s tail’.  I took the pick from an ice ax and mounted it to a custom made steel spike.  This then gets bolted through the bat – a deep penetrating spike on one side and a jagged ice ax head on the other – no venom necessary!  This piece is best used as a whip – similar to how a scorpion whips it’s tail into prey.  The SPIKE and YANK motion is sure to do the trick on any approaching zombie.

I thought this triple deckered beauty resembled a Christmas tree when I first held it up so I’ve lovingly dubbed it Silent Night.  I thought that was an appropriate name seeing that’s exactly what will happen if you clock a zombie with it.  Silent Night Sucker.  Nothing like a good game of zombie tee-ball.  A spiral wrap paracord handle gives plenty of grip because I imagine this thing would get covered in zombie muck pretty quick.  The three circular saw blades are razor sharp and I can’t even imagine the damage they could inflict if swung with proper form.  Heck, forget form, it wouldn’t matter – just swing it any old way you want.  “Swing away, Merrill.  Merrill, swing away.”

See, I told you I wanted to do something constructive and I’m positive the world is a better place now having seen these zombie death bats.  Whether or not my parents are proud is still to be determined…

What would your zombie death bat look like?  Have a great week!

PS-  Several of these bats required some woodworking cuts, drilling and notches beyond my pay grade and skill level. I’d like to give a special THANK YOU to my Uncle Jerry who helped make the vision for some of these Zombie Death Bats a reality.