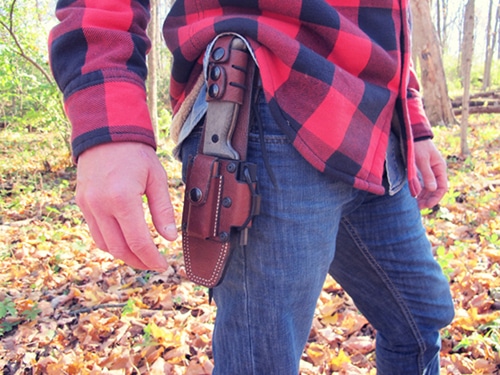 Fat Guys in the Woods Knife?

What’s the knife that Creek Stewart gives away on the survival television show FAT GUYS IN THE WOODS? (and other details you want to know)

People have wondered about my “Fat Guys in the Woods knife” since the show first aired on the Weather Channel in 2014. I wish I had a dollar for every email I get asking what it is. That’s why I’ve (years too late) written this post.

If you’re not familiar with the show FAT GUYS IN THE WOODS, each episode revolved around me taking three different men, most often with expanded waistlines and little wilderness survival knowledge out into the woodlands, swamps, and deserts of America. There, I taught the “Fat Guys” the skills necessary for survival in their given environment.

After a few days of honing these skills, I left the three men on their own (don’t worry I wasn’t far away) to put their newly learned skills to the test and survive a night alone. At the end of the show, I gifted one of the men a knife in a handcrafted leather sheath (details on that sheath below). Sometimes, the man gifted the knife was the one who performed the best, and other times it was the man who overcame the most personal obstacles.

The knife was a symbol of accomplishment and an endearing reminder that an average person is capable of great things. The show only aired for two seasons, but it’s hold on audiences remains strong because it was raw and real.

I still get lots of emails asking questions about the show, but none more-so than: What is the knife from Fat Guys in the Woods? What is Creek Stewart’s Knife? Does Creek Stewart still use the Black Bird SK-5?

Fat Guys in the Woods Knife: What knife is it?

The blade I used during filming of Fat Guys in the Woods, and the blade I gifted at the end of each episode is, indeed, the Black Bird SK-5 from Ontario Knife Company (OKC). It was also stowed inside a beautiful handcrafted leather sheath, the details of the knife and sheath are as follows:

The Black Bird SK-5 is manufactured by Ontario Knife Company, and it was designed by designer and sheath maker Paul Sheiter. This knife is part of the award-winning Black Bird Series, all designed by Scheiter. The SK-5 was designed to feature top performance and simplicity while not sacrificing any comfort or features one would want in a survival knife. You can find the knife for prices ranging from $160 to $200. It comes stock with a MOLLE compatible sheath.

Here is the AMAZON purchase link for the Black Bird SK5 if you want to pick one up: https://amzn.to/2WY1b75

Before I get into WHY we really chose the Black Bird SK5 as the FAT GUYS IN THE WOODS knife, below are the knife specs for those who really love details:

The truth is that there are 100s of survival knives on the market that would have sufficed for the show and the conditions that we found ourselves in while filming. While I absolutely loved the design, quality, and craftsmanship of the Black Bird SK5, I loved the story behind it more.

As a small business owner who has struggled every step of the way to build my wilderness survival business, I always like to support other small business owners. As I mentioned earlier, the Black Bird was designed by a guy named Paul Sheiter. I knew of Paul long before I knew of the Black Bird. Paul runs a leather shop in Missouri called Hedgehog Leatherworks. You can visit his website at: https://hedgehogleatherworks.com/ In fact, I had already purchased a leather sheath from Paul for a different knife I owned at the time – The Tom Brown Tracker. I was so impressed by Paul’s work that when I heard he designed the Black Bird, I immediately ordered it and his custom leather sheath. I had been using the Black Bird SK5 for quite a while before I even started filming FAT GUYS IN THE WOODS.

Long story short, as we (me, production company, producers, network) were discussing what special gift to give one of the “fat guys”, the producer of the show suggested to gift them the same knife rig that I use in the woods. Nothing else seemed more appropriate and symbolic of an awesome week in the woods and the decision was made.

While the Black Bird SK5 is a cool knife on it’s own, what really makes this knife rig special is the aftermarket sheath, made by Paul. If truth be told, the sheath is actually the coolest part of the whole set up. So, let’s talk a little bit about that sheath.

Shieter has been making custom knife sheaths as Hedgehog Leatherworks since 2005, and every piece is built to last and backed by a lifetime warranty. His work is well-respected in the blade world, and his custom sheath for the Black Bird takes the knife to a whole new level. Below are the sheath details pulled from his website at: https://hedgehogleatherworks.com/collections/all/products/sheath-for-the-blackbird-sk-5-knife

While I’m not sure exactly what the price is these days for Paul’s custom Hedgehog sheath, I can tell you that it’s not cheap. It will easily cost you more than the knife itself. But, I can honestly tell you that it’s the best knife sheath you’ll ever own and that it’s worth every penny.

So now that you know about my Fat Guys in the Woods Knife, let’s spend the next couple of minutes discussing the top features to look for in a survival knife (and what knife you’ll find on my belt these days).

HOW TO CHOOSE A SURVIVAL KNIFE

As far as survival knives go, there’s a reason (ACTUALLY 6 REASONS) why I decided to use the Blackbird SK5 in the first place. These reasons boil down to a list of knife features that you may want to consider when shopping for a survival knife of your own. In the short video below, I discuss these TOP 6 THINGS TO LOOK FOR IN A SURVIVAL KNIFE. I’ve also written a full article on this subject of HOW TO CHOOSE THE PERFECT SURVIVAL KNIFE here: https://www.artofmanliness.com/articles/how-to-choose-the-perfect-survival-knife/

What Survival Knife Does Creek Stewart Use Today?

I love knives too much to use the same one for very long. While the Blackbird SK5 holds the record for the longest I’ve used one survival knife, I tend to mix it up these days and am rarely consistently found in the woods using the same knife. Below are a few of my favorite bushcraft/camp/survival knives currently:

This is another entry in the catalog of Ontario Knife Company. Their Old Hickory Line of knives are well-known and beloved amongst bushcrafters and survivalists alike. From the kitchen to the wilderness, these knives can do it all. Ontario has a couple different sizes, but the one I currently use is the 5.5-inch. It’s a well-rounded outdoor survival knife in the Old Hickory Hunting Series, and comes with a leather sheath. Below are the specs if you’re curious:

If you type “bushcraft survival knife” or “bushcraft knife” into the Google machine, the results will likely yield a Mora blade. Made in Sweden, these fixed-blade knives are known for their affordability, quality, ability to hold an edge after many uses, and their ability to take a complete and utter beating and keep on working. Mora has a history of blade-making that goes back over 400 years. You can find Mora knives at many places online for less than $20.

The Mora Companion 840MG embodies everything for which Mora is known. I’ve used the same 840MG for over 10-years and it’s still one of my absolute favorite knives. Here’s what this knife entails:

While the Blackbird SK5 isn’t the knife I use most often anymore, it’s still one of my all time favorites. If you’re looking for the BEST SURVIVAL KNIFE, you’ll no doubt find plenty of advice on the interwebs. But one thing I’ve learned over the years is that many knives will do the job just fine. Choose one that you like and from a company you want to support and you won’t go wrong.

What about you? What’s your preferred survival knife and why? Tell us in the comments below!