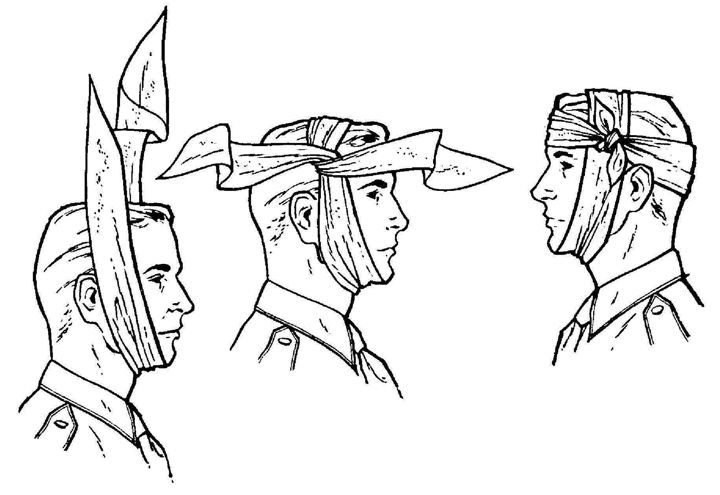 As a reminder, the triangle bandage is a piece of cloth, often unbleached muslin, that is a right triangle with legs about 40″ (102 cm) long, and a hypotenuse, or long side, around 56.6″ (144 cm). It is folded on itself three times to make a cravat bandage. Remember: for all wounds, the first thing to do is to control the bleeding, clean and cover the wound with gauze padding, and if it is available, some antibiotic ointment. The bandage is used to lock the gauze in place. In looking at the bandaging below, it will be assumed that has already been done.  This time, we’ll be bandaging the head and its associated structures; some of these will require two cravats.

Triangular cloth bandages are one of the least expensive and lightest weight items in a wilderness first aid kit. Yet, they can be used to splint, sling, or bandange nearly every part of the human body. In this course, you’ll learn from a board certified physician how to use them in over 25 different ways to stabilize common injuries in the bck country until medical help can be reached.

Bandaging the scalp is only modestly more challenging than what we’ve already done.  Begin by folding the long edge over itself three times, about an inch or an inch and a half wide.  Having done that, drape the bandage over the scalp, with the right angle going down the back of the neck and the middle of the folded part over the forehead.  Bring the two ends of the folded part behind the head and to the middle of the scalp.  To minimize the risk of this slipping up, put the folded part under the occiput—that’s the bump you can feel on the back of your skull.  Tie a square knot in the middle of the forehead to anchor the bandage.  Then, take the right angle and fold it up, tightening the part over the scalp then tucking the end into the folded part. If possible, and pinning it in place with a safety pin It is much clearer if you look at the diagram below

Clearly, this bandage not only will handle the scalp, it will do well for the forehead and the back of the head as well.

THE HEAD or EAR

Sometimes there is need to bandage an eye. Doing this requires two bandages, both folded into cravats.  Drape one cravat over the head, covering the good eye, so it hangs down the back of the victim’s neck and down his face.  Take the second cravat, wrapping around both eyes and over the first cravat, tying it in the front, over the uninjured eye.  Finally, take the ends of the first cravat and loop them over the head, tying them on the scalp so that the second cravat is lifted off the good eye.  The figure below will help this all make sense.

THE CHEEK or JAW

Sometimes, there is need to bandage a cheek, the area below the chin, a small area on top of the scalp or a need to immobilize a jaw temporarily, as might be for a fracture of the jaw or a dislocation of the jaw.  A single bandage, fold into a cravat, is needed.  Position the cravat under the jaw, with the more distant part of the cravat a few inches longer than the near one.  Bring the far side across the top of the head to the temple of the near side, then twist them around each other a quarter turn, so the two sides are horizontal, one pointing forward and the other backward.  At this point, the two free ends should be about the same length.  Take the ends around the victim’s head and knot them on the other side.  The process is illustrated clearly in the figure below.

The next posting will handle bandaging the chest, hip, buttock and shoulder.

Is that 253 Maple Seeds in your mouth or are you just happy to see me?