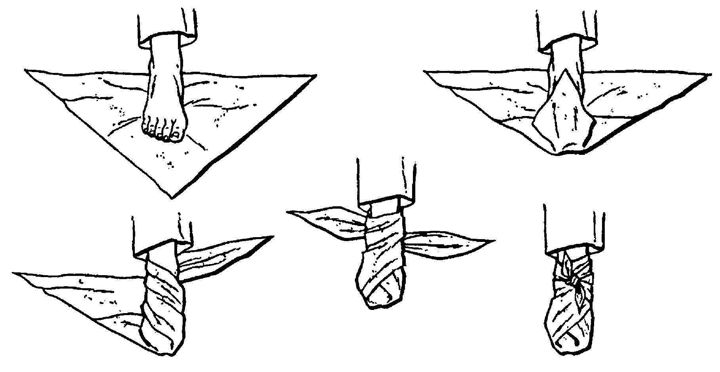 As a reminder, the triangle bandage is a piece of cloth, often unbleached muslin, that is a right triangle with legs about 40″ (102 cm) long, and a hypotenuse, or long side, around 56.6″ (144 cm). It is folded on itself three times to make a cravat bandage. Remember: for all wounds, the first thing to do is to control the bleeding, clean and cover the wound with gauze padding, and if it is available, some antibiotic ointment. The bandage is used to lock the gauze in place. In looking at the bandaging below, it will be assumed that has already been done. This week let’s look at bandaging parts of the leg, which is very similar to bandaging the arm.

One bandage left, bandaging the leg. The figure below will show bandaging the lower leg, or calf area, but the same technique will work for the thigh, if the thigh is not too large. As with the arm, the triangle bandage needs folded into a cravat. Place the middle of the cravat behind the leg, bringing one side around the front and wrapping upward, then bring the other side around, wrapping downward.  This is very much the same as bandaging the arm, and the figure below makes that clear.

These are the easiest things to do with the triangle or cravat bandage.  Next time we’ll look at something a little more challenging—bandaging things on the head and face.

6 Last-Minute Gifts That Any Survival Loving Graduate Will Appreciate

How to make a Wooden Mallet for Bushcraft & Survival