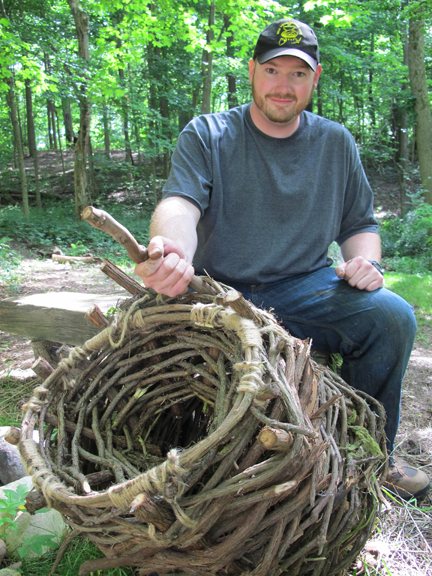 How to Make a Primitive Funnel Fish Trap that keeps on giving.

Passive trapping versus active hunting is almost always preferred in a survival scenario.  Not only does trapping typically require less energy, but it also enables one to focus on other important survival tasks such as shelter, fire, water, foraging and signaling.  Passive fish traps are among some of the oldest documented relics from indigenous cultures all over the globe.  Stone weirs built many hundred years ago in rivers and low tide areas still exist today.  Funneling fish for easier capture was a strategy used to put food on the table in almost every primitive culture.  While different trap designs exist, there is one design that seems to be universal – the woven funnel trap.  Whether made from bamboo in the wetlands of Asia, reeds on the coast of New Zealand or grapevine in the forests North America the funnel basket trap varied only slightly in design across multiple continents and cultures.  This speaks to its effectiveness in the field and I can confirm first hand that it is one of the most effective primitive methods for putting fish in the frying pan.  Below is one method I use to build a classic Primitive Funnel Style Basket Fish Trap.

There are essentially two parts to the funnel basket trap: the body and the inverted cone cap.  The concept (as can be seen by the schematic below) is simple.  Lured by the scent of bait, the fish enter the main trap body through the inverted cone shaped cap.  Once inside they aren’t smart enough to figure out how to get back out.  It’s not at all uncommon to catch other types of water critters in these traps as well including crayfish, crabs, shrimp and even small turtles.

It all starts with building the main trap body, which is typically in the shape of large cone.  The size is based on the type of fish you’re attempting to catch.  I’ve had great success with traps that measure 4-5’ long and the main body opening in the 20-24” range.  To build the main body framework you’ll need 7 to 11 small saplings a little longer than your intended main body trap length.  The main body must have an odd number of ribs.  This is necessary for the over/under weaving pattern that we’ll discuss later.  The number you use isn’t important.  I normally use 7.

If you have cordage then this process will be easier.  In this example I’ve used willow bark cordage exclusively.  During the spring and summer months you can easily strip the bark from willow saplings in long strips.  These strips make perfect cordage for lashing together a funnel trap.

I start by lashing one end of my willow staves around a stick about 12” long x 2” in diameter.  This keeps the staves in a nice uniform circle.  Then, using a piece of grapevine and some willow bark I create a hoop to form the opening for the main body and quickly tie it to the inside of the other end of the willow staves.  This helps to create the main cone shape to the trap body.  The hoop will be removed after the trap is about ¼ woven.

Now is time for weaving.  I’ve used all kinds of different materials for weaving traps.  It really comes down to what is available.  In this example I start with some left over willow bark and then move to some cattail leaves.  I finish it with a variety of grapevine and Virginia creeper vine.  I’ve even used long pieces of grass before.  In some environments and seasons it can be difficult to find enough of what you need so it doesn’t have to be entirely woven from the same material.  Mine often are not.  The weaving pattern is simply an over/under pattern repeated.  When I weave in a new piece I normally overlap the previous one by at least one rib.  It’s important to pull everything nice and snug.

Once you get about ¼ done with the trap you can pull out the grapevine hoop at the top and the weaving will go much, much faster.  The hoop is just to hold the shape temporarily while you get started.  You can expect the weaving process to take at least 1-3 hours, depending on the size of the trap.  You can extend the length of the trap if you wish by shoving in longer ribs alongside the existing ones and continuing to weave.

When you come to a finishing point, simple lash the last three wraps together in a few spots with some willow bark or cord and trim off the jutting ribs about 1 inch above the rim and the body portion of the trap is finished.  It’s now time to weave the cone which will form the cap/entrance of the trap.

The easiest way to form the cone/cap of the trap is to stick an odd number of stakes (ribs) in the ground to form a cone shape.  The bottom (smaller hole) of the cone should be large enough for your target fish to fit through.  In this case I’ve made mine about 4 inches in diameter.  The top (larger hole) should be right around the same diameter of the open mouth of the trap body you’ve just woven.  This cone will be a cap for the trap body and you want the two larger holes to mate up nicely.

Once you have the cone shape staked in the ground, it’s time to start weaving again.  I prefer smaller vines over larger hard to manage ones.  The ones in this example are about ¼ inch in diameter.  Weave them to the very top of the cone shape and lash them to finish it off just like the end of the body.

Pull the cone from the ground and trim off any protruding ribs from the top and bottom holes.

This concludes all of the hard work.  Now, the trap is ready to be baited and set over and over again.  This is a self sustaining trap.  Each time something is caught, the inedible and unusable parts such as the intestines and some organs and bones are used to bait the trap again to catch more food.  Each caught fish provides food and future bait.  I’ve found that native fish parts and pieces produce much better results than store bought items such as chicken livers, bread or peanut butter.  All animals prefer to eat what they naturally would.

As you can see from the photos, the cone shape is inverted to cap the larger opening of the trap body.  Fish can easily swim inside but don’t have the logic and reasoning skills to find their way back out.  After baiting, I tie the cone cap on in three spots to ensure it doesn’t come loose.

I’ve found it’s a good idea to contain the bait inside of something rather than just random tossing it inside the large trap body.  I’ve used all kinds of methods.  I’ve created little bait balls wrapped in a scrap piece of t-shirt and tied it hanging from the inside.  I’ve also used little wire cages.  Pinecones are a good primitive solution.  You can wrap and stuff your bait inside the stiff pinecone bodies and it keeps the bait in one place.  Then, this ‘bait ball’ can be hung from the back of the trap.  Using this method, fish have to come inside to get the bait rather than nibble it through the sides when it’s free-floating randomly inside the trap body.

Now, it’s time to set the trap.  I don’t personally like getting in water when I don’t need to so I set this trap by tying it off to a stake or tree near the water’s edge and simply throw it a few feet off shore.  These traps will often float so you may need to toss one or two big rocks inside to weigh it down.  I had to do that to this one.  For bait, I sacrificed a small bullfrog and smashed the bits and pieces of him into the pinecone (except I kept the legs for dinner).

I checked the trap early the next morning and had a small bluegill.  I gutted it and kept the meat for dinner.  I stuffed and wrapped the guts, fins and head into the pinecone bait ball and threw the trap back in.  Some of the frog was still left over but the fresh scent is necessary.  Later that day I caught a larger bluegill.  I repeated the gutting and bait ball process.  The next morning I checked the trap again and found a large catfish.  Honestly, I’m not even sure how this monster wiggled its way into the trap.  His head was almost as big as the entry hole.  I didn’t set the trap a third time but you can see by the gut pile next to the catfish that there is plenty of bait to do so.  Like I mentioned, this is a self-sustaining trap.  It will keep giving and giving and is an amazing way to passively gather food in a survival scenario when saving calories is imperative.  I’ll choose passive trapping over active hunting all day long.

Below is a photo of Kevin from my SurviVacation II course with the first basket trap he ever made.  It’s a monster and he also caught a bluegill in an overnight set.  Experience isn’t necessary but patience is.  He spent several hours making sure it was woven well.  It’s important to pay careful attention to detail when weaving the trap.  Every fish inside counts – even the ones only 2” long.  A 2” fish can lead to a 10” whopper but the trap must be well made in order to catch even the smallest fish and crayfish.  This is one skill you just can’t rush.

If you like learning primitive skills like this one, consider reading my book BUILD THE PERFECT BUG OUT SURVIVAL SKILLS.  I’ve included the PRIME LINK below.